Pictures go hand and hand with videography. While you are filming the moment you also want to capture a still image with the video you are producing. So shout out to Matthew Capili for capturing these moment for " KiANAJTv's ViSUAL EP01: The Ëlements: AiR: Zööm".

While taken as the subject first hand IN THIS project I wanted to explain first hand here the inspiration, the story of how LONG of a process this video was for me. On my temporary farewell video for my YouTube Channel I explain how in order to take 10 steps forward need to take two steps back to reboot, rebuild my foundation of what Kiana J really is and express it on KianaJTv.

I started filming July 7th, 2017 and didn't finish my last piece of filming until late November, early December 2017. So for 1 video that was a lot and took a long time, but I am so happy with the work of art I've created and become.

So on the actual filming day which me and my former filmer had scheduled i didn't really want to do it. I was actually scared and was like how is this going to work. As you can see on y YouTube channel I practice a slow-mo technique to practice singing at 200% and film at 30 fps. So I tried and came out good in the second take. So I filmed in fast speed and also regular speed for non lyrical shots.

First I knew I wanted to film something with air, water and fire as the storyline. When I look at what i filmed in it look like it represented fire but I had a whole script written out where I could incorporate actual fire. So I was left with two other choices which were air or water, water didn't go well with the flow of how I edited the video so i just stuck with air. Why air you might ask? because the wind was flowing that day and that is the element of the Aquarius sign. So why not. I knew since I reintroduced my channel I wanted to a clear purpose/storyline in each video. So I felt after I filmed the actual music portion of the video, I still needed to tell a story of how to incorporate Air in the entire video. Then it came to me. Spoken WORD+ Visual= BEGINNING OF VIDEO

So here's the funny thing. I made the poem before actually shooting the video. I kinda had an idea on the beach how to move and the look I was going for. I didn't know how it was going to turn out until the editing process came about and I LOVED it.

At the beach as on my Snapchat Story I was so frustrated because on the beach everybody was getting in my way when I was trying to film and NOT using proper camera courtesy. I kid you not I'll be in the middle of filming and someone would walk through IN FRONT OF THE CAMERA, when there was plenty of space behind. As soon as I was about to leave and walk off. Something told me to stay and 20 minutes later the beach started clearing up and I were able to get the shots that I wanted.

Lesson learned: When you have a lot of bumps in the road. All that really means is DON'T STOP, Greatness is ahead. If you stop now you let your bumps defeat you.

I know in order for my videos to become victorious I always encountered multiple bumps in the road. 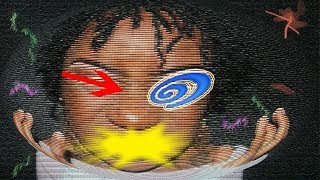